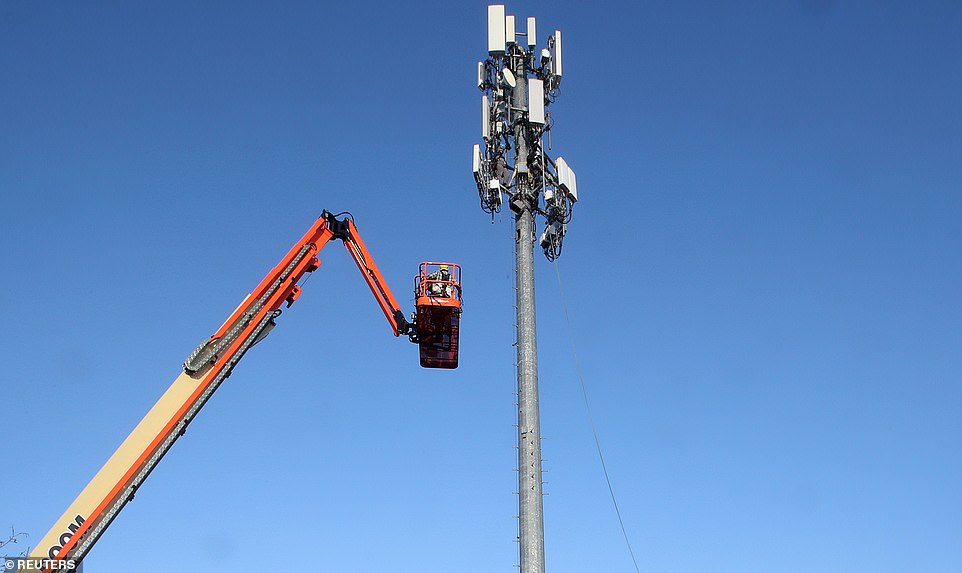 5G rollout will ground planes and cause travel chaos, US airlines warn

Passengers should check with their airlines if weather is forecast at a destination where 5G interference is possible."

The 10 biggest US airlines have warned that the impending switch-on of 5G mobile phone services will cause "major disruption" to flights.

The fear among airlines, aircraft manufacturer Boeing and the US Federal Aviation Administration is that the new 5G network could interfere with vital aircraft instruments that are on a similar wavelength.

This includes altimeters, which tell pilots their altitude as they fly in low visibility.

Any false readings could confuse them as they approach the runway in poor visibility conditions, with potentially disastrous results.

'There have been no reported incidents of aircraft systems being affected by 5G transmissions in UK airspace, but we are nonetheless working with Ofcom and the Ministry of Defence to make sure that the deployment of 5G in the UK does not cause any technical problems for aircraft. '

a spokesperson for the caa saying : 'we are aware of reports that suggest that the frequency band being used for 5g in a number of countries could potentially pose a risk of interference with aircraft radio altimeters. 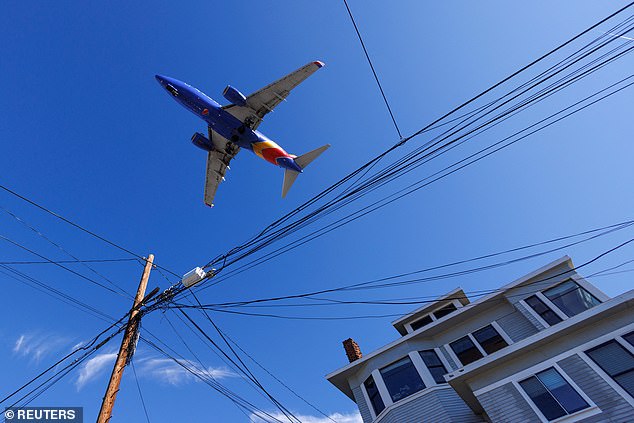 ofcom said : 'we 're aware that the aviation sector is looking at this; we 've done our own technical analysis and are yet to see any evidence that would give us cause for concern. '

Gareth Elliott, Head of Policy and Communications at Mobile UK, said the networks were 'coordinating with the aviation authorities' to ensure there was 'no interference in the UK '.

"this means that on a day like yesterday, more than 1,100 flights and 100,000 passengers would be subjected to cancellations, diversions or delays. '

Other planes could be grounded permanently because the altimeter provides signals to their mandated safety features. 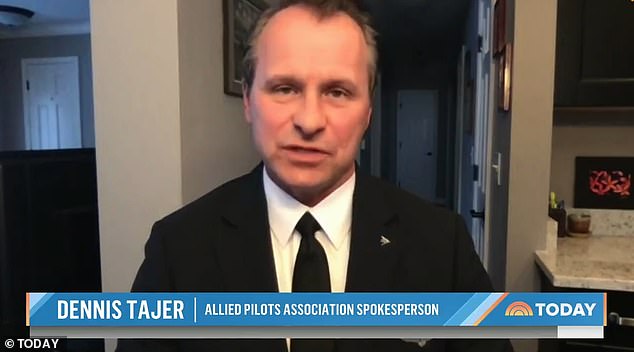 Action is urgent, they added in the letter, writing : 'To be blunt, the nation´s commerce will grind to a halt. '

It was signed by the chief executives of American Airlines, JetBlue Delta Air Lines, United Airlines and Southwest Airlines, as well as officials from FedEx Express and UPS Airlines.

Verizon and AT & T have since agreed to push back the launch of their new service from January 4, but it is now set to debut on Wednesday.

The CEOs warned a significant number of widebody aircrafts will become unusable and 'could potentially strand tens of thousands of Americans overseas. ' 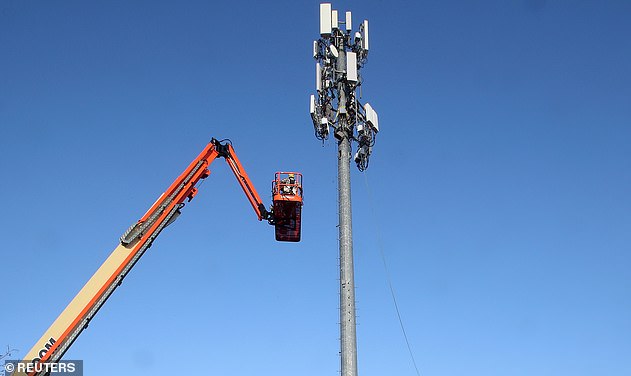 The wireless service can render radar altimeters unreliable. Pictured is a Verizon 5G tower going up in Utah

'Unless our major hubs are cleared to fly, the vast majority of the traveling and shipping public will essentially be grounded,' the CEOs wrote.

'The harm that will result from deployment on January 19 is substantially worse than we anticipated for two key reasons,' they explained.

Additionally, they argued, because radio altimeters provide critical information to other safety and navigation systems in modern aeroplanes, multiple modern safety systems 'will be deemed unusable. ' 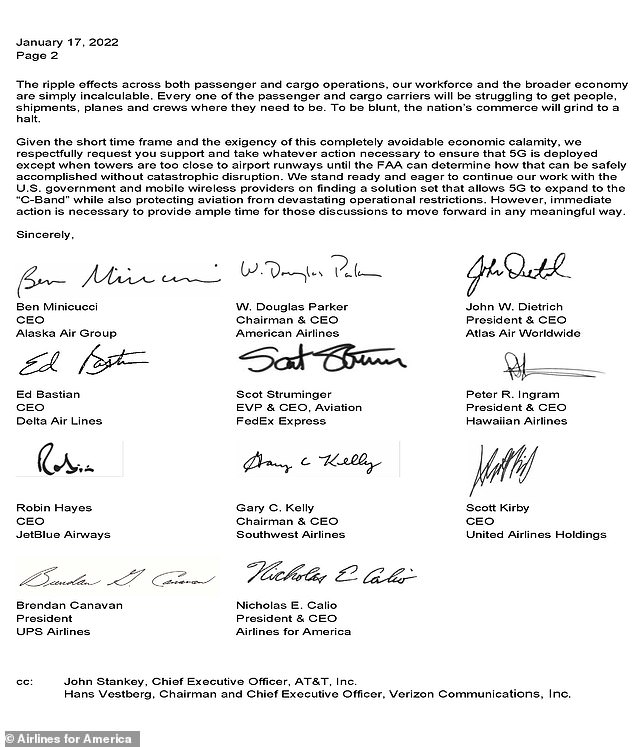 The group of airlines said : "Airplane manufacturers have informed us that there are huge swathes of the operating fleet that may need to be indefinitely grounded.

'The ripple effects across both passenger and cargo operations, our workforce and the broader economy are simply incalculable,' the CEOs wrote as they asked officials 'that 5G be implemented everywhere in the country except within the approximate 2 miles of airport runways' at some key airports.

The carriers added they urge action to ensure '5G is deployed except when towers are too close to airport runways until the FAA can determine how that can be safely accomplished without catastrophic disruption. ' 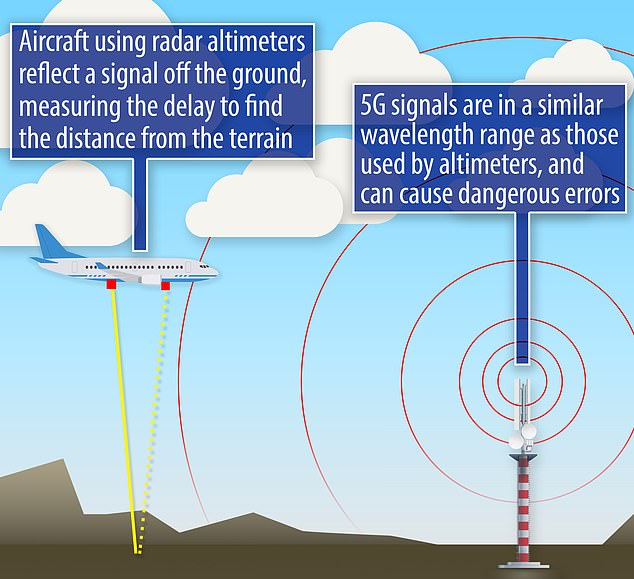 Aviation officials fear that 5G signals near airports could interfere with certain airplane instruments, including the radio altimeter used to gauge altitude

AT & T and Verizon, which won nearly all of the C-Band spectrum in an $ 80 billion auction last year to launched their 5G services, had agreed to buffer zones around 50 airports to reduce interference risks and take other steps to cut potential interference for six months. 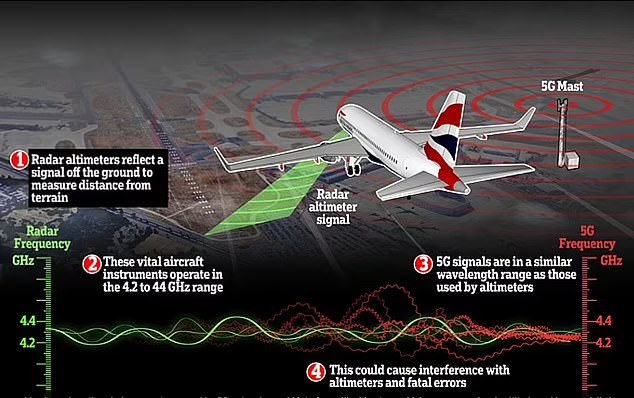 This graphic shows how the wireless spectrum used by 5G networks could interfere with altimeters, which measure a plane's altitude and is especially important for low-visibility operations. The CEOs of the airlines have asked officials that the 5G be impl

The CEOs of major airlines and Boeing Chief Executive Dave Calhoun held a lengthy call with Buttigieg and Dickson on Sunday to warn of the looming crisis, officials told Reuters.

but the issue doesn't just affect aeroplanes- they could also have a negative effect on the nation's helicopters, including lifesaving medevac choppers.

Under US law, all commercial helicopters must have a working altimeter in order to fly.

Without them, officials warn, landing in remote areas or on hospital landing pads will be near impossible. 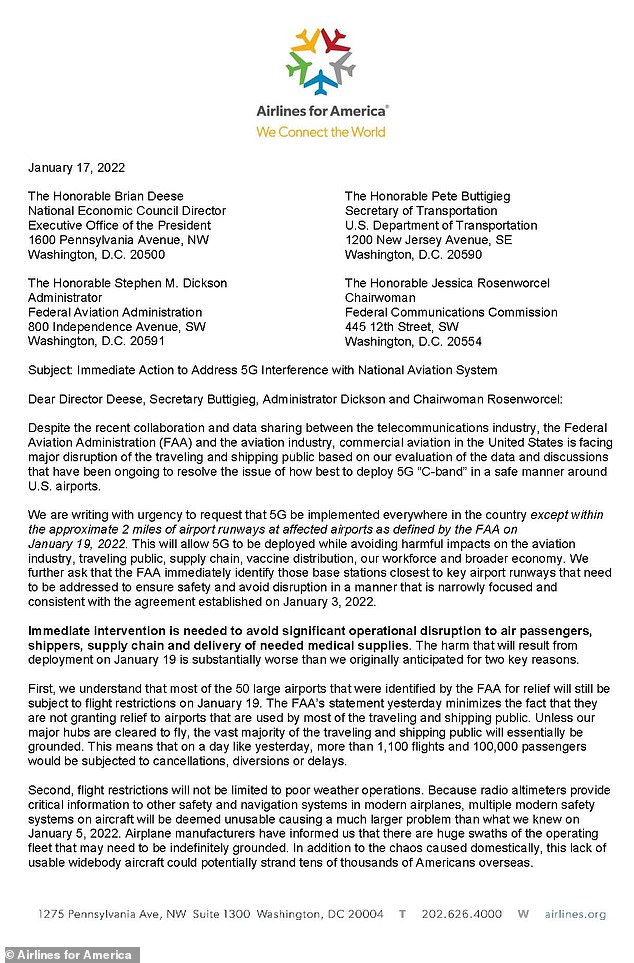 Helicopter Association International petitioned the FAA in October asking for medevacs to be exempt from the law when 5G rolls out, and the FAA granted it last week for areas where 5G C-Band interference could affect the radio altimeter.

The warning was issued in a letter sent to US aviation authorities.

"even with these new approvals, flights at some airports may still be affected," the regulator said.

'The FAA also continues to work with manufacturers to understand how radar altimeter data is used in other flight control systems. 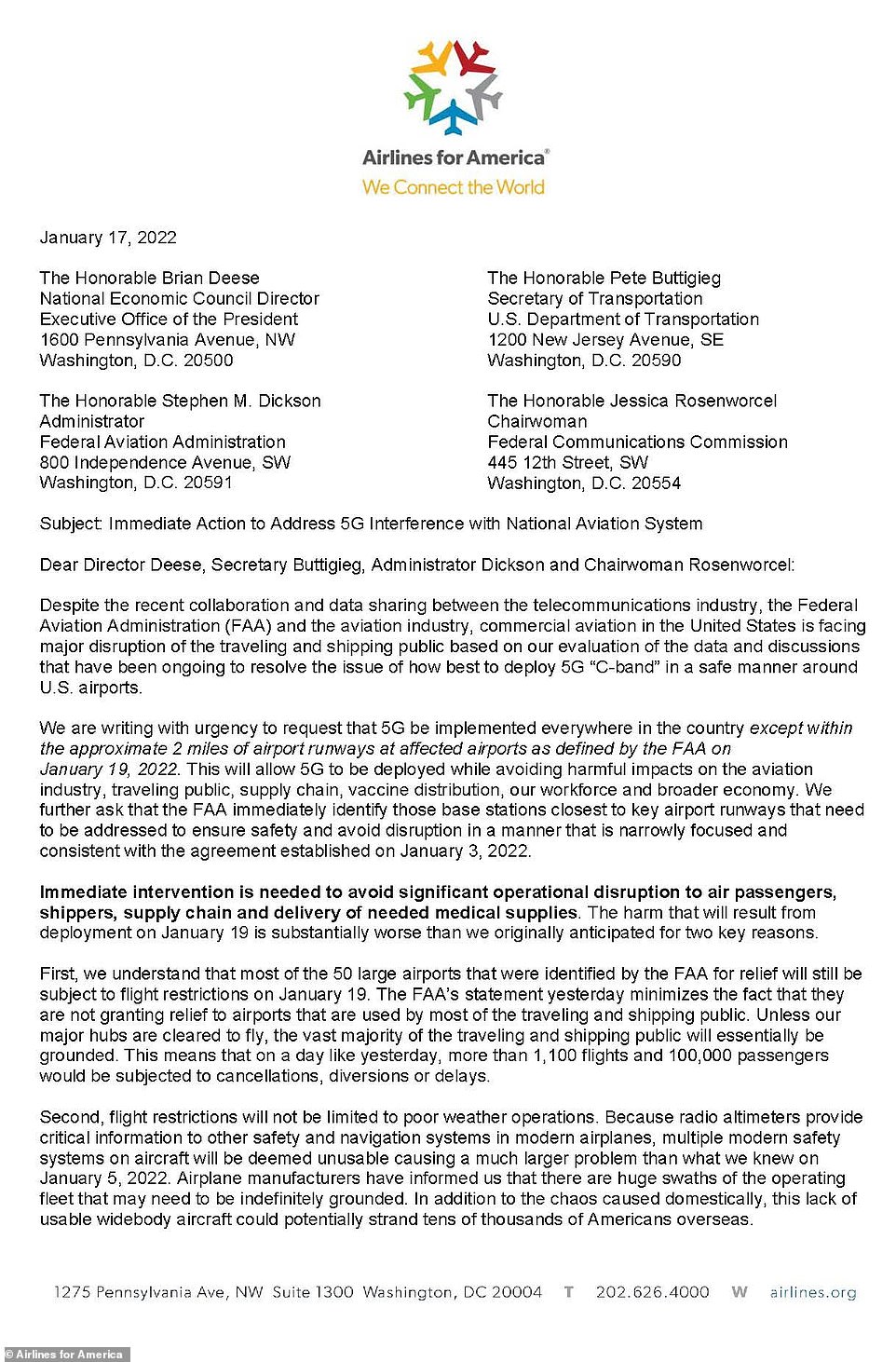 The airlines noted on Monday that the list did not include many large airports.

The FAA said it 'will continue to ensure that the traveling public is safe as wireless companies deploy 5G.

Hazel O'Connor: Punk singer placed in induced coma after bleed on the brain