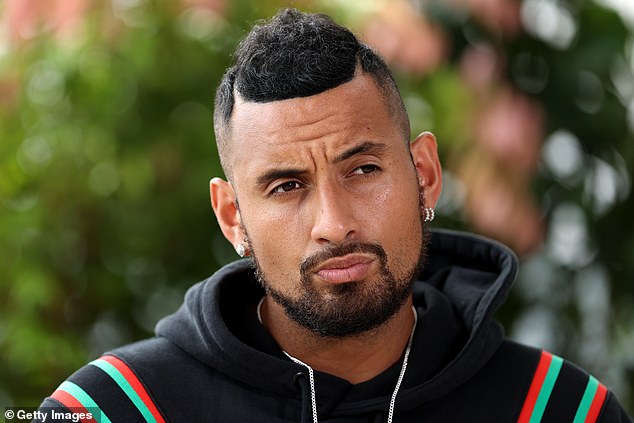 the australian government has lost its bid to delay novak djokovic's appeal against deportation after a ruling by the judge presiding over his case.

Djokovic was denied entry to Australia last week due to his unvaccinated status.

Supporters gathering outside the hotel also prayed for the tennis star during the Orthodox celebration of Saint Stephen's Day.

Home Affairs Minister Karen Andrews asked the federal court on Saturday night to adjourn the case two days until Wednesday- barely five days from the start of the Australian Open.

Djokovic's team argue he met the requirements of the Australian Travel Declaration assessment for quarantine-free travel.

Djokovic and his lawyers will appear before a Melbourne court at 10am on Monday, with the case hoped to be resolved before the 4pm deadline needed to confirm his place in the Australian Open.

He could be given special permission to play in the tournament if the case is not resolved, but if he loses he will be deported back to Serbia. 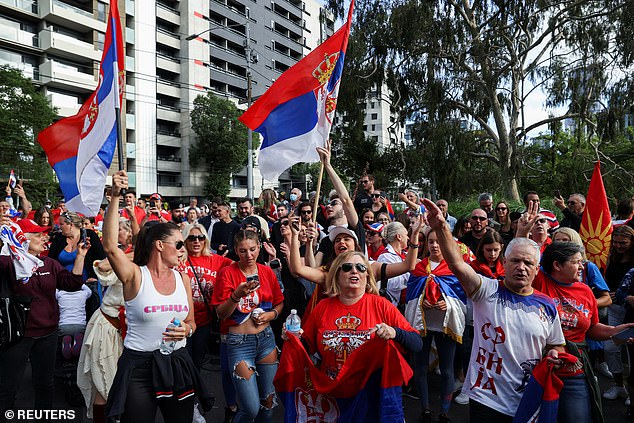 Serbian fans pack the streets outside the Park Hotel in Melbourne where Djokovic is currently being held to show support for the world no.1

images from djokovic's social media from the day he says he tested positive for covid show the 20-time grand slam winner mingling with people and even children across two different events.

He was seen hugging children at his tennis centre in Dorcol, Serbia and spoke at event for his foundation on December 16, the same day he produced a positive result on a PCR test from the Institute of Public Health of Serbia.

In his submission to the federal circuit court, Djokovic says he was granted a temporary visa to enter Australia on 18 November, and received a letter from the chief medical officer of Tennis Australia on 30 December recording he had a "medical exemption from Covid vaccination" on the grounds he had recently recovered from the virus.

Polarising Australian tennis star Nick Kyrgios, who previously has stated he 'isn't a fan' of Djokovic for a host of reasons, believes the situation involving the world number one has been handled woefully. 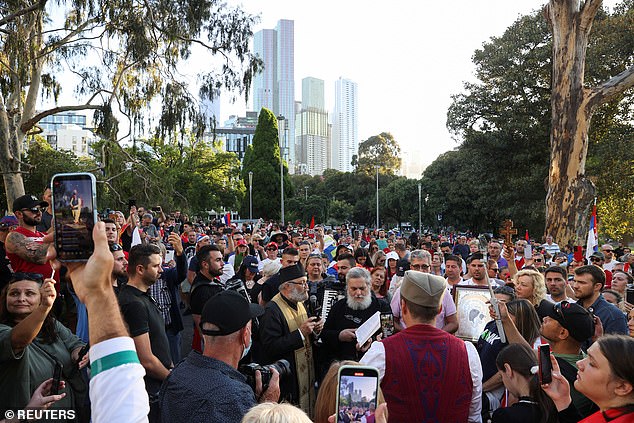 Djokovic's case has also elicited heartfelt support for the star back home in his native Serbia, where he is lauded as a national hero

I think it's really bad."

I know him well, and I 've always had a good relationship with him, and I hope that he's OK. "The second thing I 'll say on it ... it's really not good for tennis at all, and I don't think it's good for anyone involved.

He's one of the most influential sports people probably of all time.

Court documents show Djokovic believed his 'exemption certificate' was 'consistent with the recommendations of the Australian Technical Advisory Group on Immunisation '. 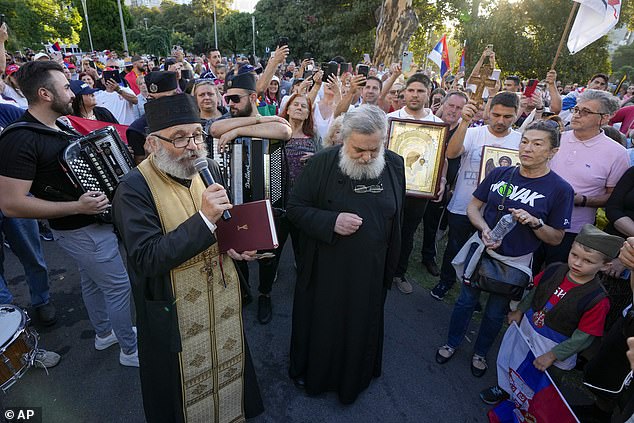 Serbian priests hold a service for Novak Djokovic and his supporters outside the Park Hotel, used as an immigration detention hotel where Djokovic is confined in Melbourne, Australia

The Serbian, according to documents lodged in court, was told at the beginning of the interview at 12.12am that a previous infection did not mean he had vaccinated status in Australia.

He was woken 'well before' that time, according to the documents, and pressured by two agents to make a decision, before his visa was cancelled at 7.42am.

"we 've chosen at this point not to be very public with it … simply because there is a pending lawsuit related to entry into australia.

Once that has run its course, we 'll be able to share more with you. 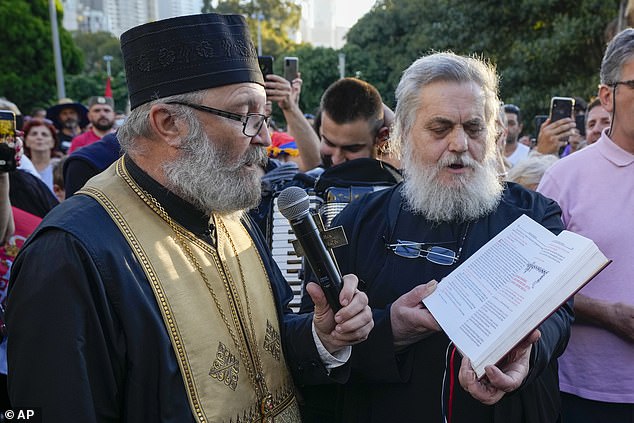 Since arriving from Dubai on Wednesday, Djokovic has been held in an immigration detention hotel, which Murray believes is a 'really bad' look for tennis.

the federal government control the australian borders and the border force decided that djokovic had not satisfied entry requirements.

He is currently in immigration detention at the Park hotel in Melbourne. 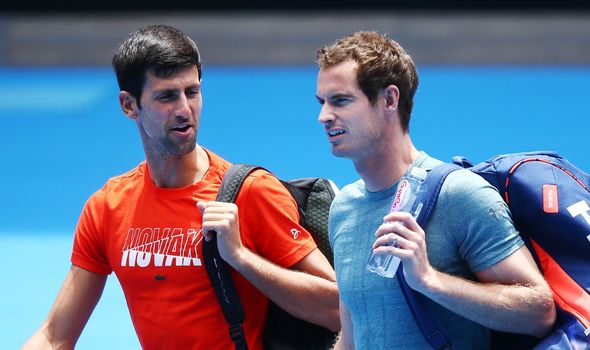 Djokovic claims that he was denied access to his legal team during parts of the eight hours of interviews he endured upon his arrival at Melbourne Airport on Wednesday night.

Meanwhile, Renata Voracova, the Czech doubles specialist who had initially passed Australia's border checks with the same medical exemption as Djokovic, has been deported from the country following her own subsequent detention.

Voracova had competed in one tournament in Melbourne before she was detained and then she chose to voluntarily leave the country.

I wanted to focus on tennis, not visas, quarantine. 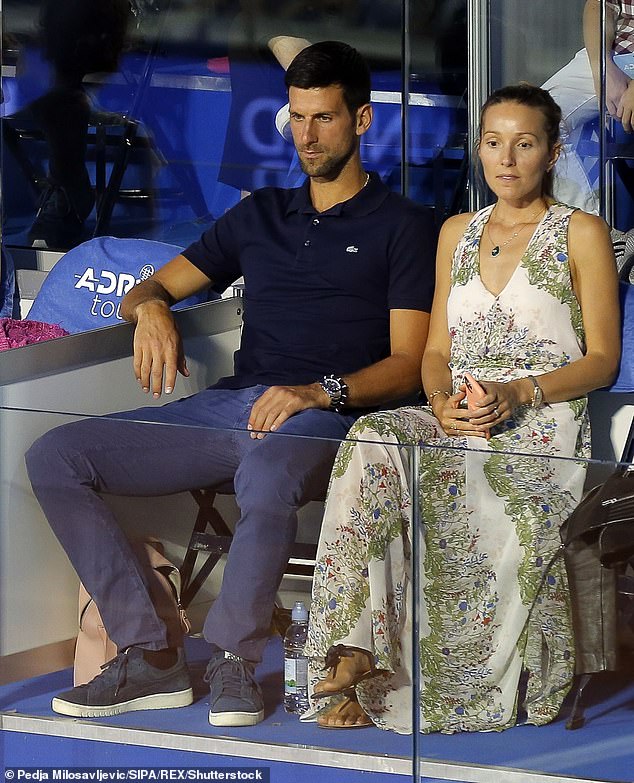 Djokovic (pictured with wife Jelena) and his lawyers will appear before a Melbourne court on Monday, with the case likely to be resolved before the 4pm deadline needed to confirm his place in the Australian Open

The Australian health minister, Greg Hunt, on Sunday said the investigation of Australian Open visas had been finalised and Voracova and one official had left the country.

"Two other individuals have now voluntarily left the country … any individual who has their visa cancelled is entitled to leave the country at any time, even while they are going through a court proceeding, but that is a matter for them," Hunt said.

Earlier on Saturday, a leaked video obtained and published by News Corp showed Craig Tiley, the Tennis Australia boss, sending a video to his staff explaining his silence since Djokovic's detention and commending their work.

He is a high-profile anti-vaxxer amid the Covid pandemic but thought Tennis Australia and Victoria State granted him a medical exemption to appear at the tournament. 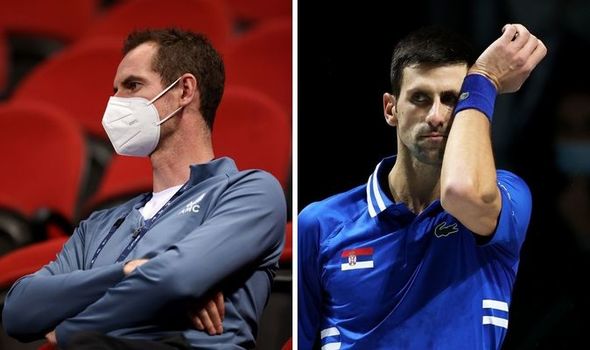 Now being kept in a detention hotel whilst he awaits a verdict from the Federal Circuit and Family Court of Australia on Monday, the Serbian superstar has received global support.

"I'm going to say two things on it just now.

In an order, published on Sunday, judge Anthony Kelly rejected the move which would have delayed the hearing until Wednesday – after Tennis Australia's stated deadline to include the world number one in the Australian Open draw.

If the current timetable remains in place, the government's lawyers will present oral submissions on Monday afternoon. 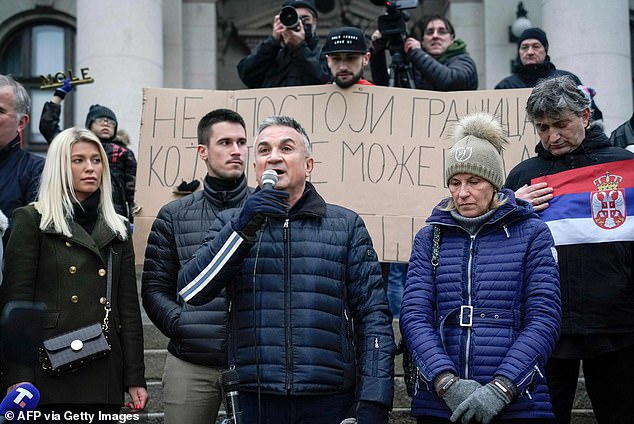 Djokovic's family held a rally of support for a third day running. Standing in front of the Serbian parliament building in Belgrade his father Srdjan Djokovic said he was 'disgusted' at the way his son was being treated

The court heard on Thursday that Tennis Australia had said it would need to know whether Djokovic could compete by Tuesday for scheduling purposes.

"they'd have to find another reason or it would be contemptuous of court," he said.

"What we do know, however, with our dealings with the department of home affairs is that is often not the case," she warned, citing three instances she had won in the federal court only for the minister to find a fresh reason to cancel a visa.

Refugee lawyer and the founder of Human Rights for All, Alison Battisson, said if Djokovic won on Monday the government should respect the court's decision rather than "seek to wriggle around by finding another way to cancel his visa". 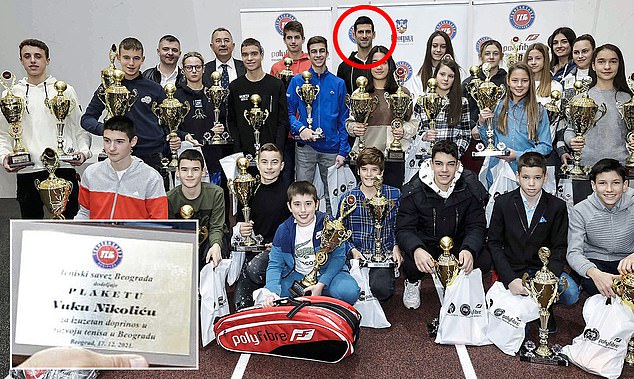 On December 16, Djokovic (pictured centre at the back) posed with dozens of children at a PR event with the Tennis Association of Belgrade, the day of the purported positive PCR test