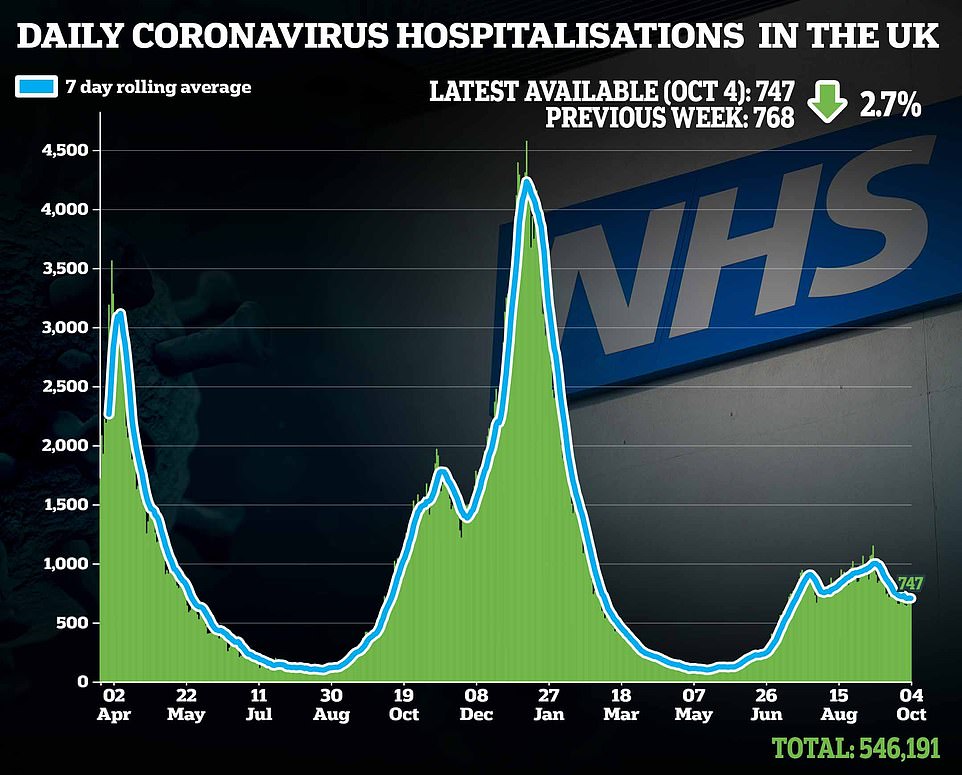 This has been largely driven by a notable increase among secondary school pupils, likely reflecting their return to school in September."

Yorkshire and the Humber and the East Midlands had the highest proportion of people of any region likely to test positive for coronavirus in the week to 2 October, at around one in 55.

Around one in 15 children in school years seven to 11 are estimated to have had Covid-19 in the week to October 2- the highest positivity rate for any age group.

Kevin McConway, emeritus professor of applied statistics at the Open University, said that with around four million children in that age group in England, one in 15 equates to around 270,000 testing positive.

He said that based on separate ONS estimates on long Covid prevalence, this could mean about 13,500 could go on to have long Covid symptoms, and almost 7,000 will have symptoms that limit their day-to-day activity.

Prof McConway added : "That's rather a lot of children who will have their schooling and other activities disrupted.

"I think the main necessary action here is to get on with vaccinating those aged 12-15 as quickly as possible- though, given that it takes time for the vaccine to become effective, that's still not going to bring down the infection rate in this group all that fast. 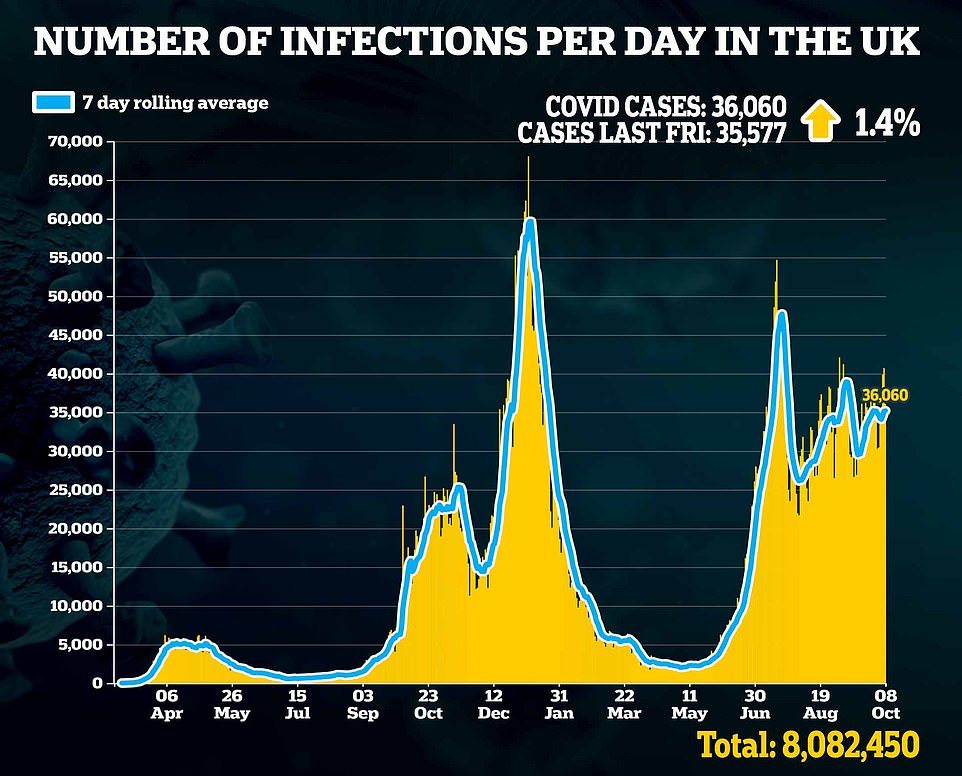 Unison's assistant general secretary Jon Richards said masks and school bubbles needed to be reintroduced and the vaccine rollout to 12 to 15-year-olds sped up.

He added : "The government can no longer look the other way while coronavirus rates rocket in secondary school-age children and are still unacceptably high in primary.

Sara Crofts, head of analytical outputs for the ONS Covid-19 infection survey, said : "There is a mixed picture of infection trends across the UK once again, with the largest increase seen in England.

the latest data shows the percentage of people testing positive for covid-19 is estimated to have increased in all regions except the east of england is the only area that has not seen an increase in infections, as the ons said the trend is uncertain.

London and eastern England had the lowest at around one in 90.

One in 14 secondary school-age children had Covid last week, according to figures released by the Office for National Statistics.

The substantial increase – up from an estimated one in 20 pupils the previous week – suggests that the spread of Covid through secondary schools is far outpacing the government's vaccination programme.

The ONS survey, based on swabs collected from randomly selected households, showed an overall increase in Covid infections in England from one in 85 people to one in 70 in the week ending 2 October. 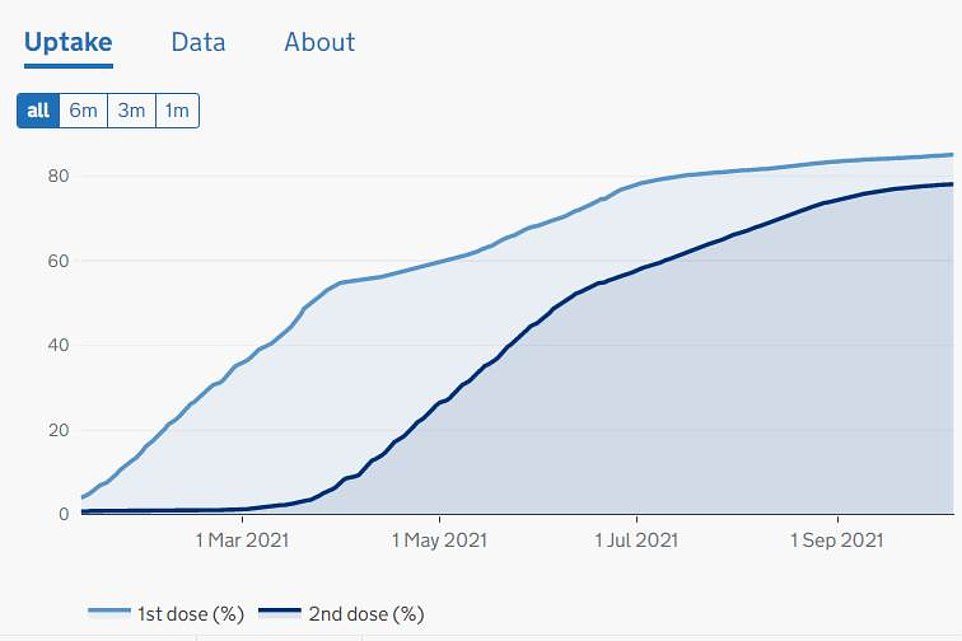 Covid cases fell in recent weeks in Scotland and Northern Ireland with an "uncertain" trend in Wales, the ONS survey found.

Mark Woolhouse, professor of infectious disease epidemiology at the University of Edinburgh, said : "It's quite clear that natural infection is well ahead of vaccination in that age group at the moment.

It would take a really concerted effort to catch up.

"I don't think that ’ s a reason to back off the vaccination," Woolhouse added. 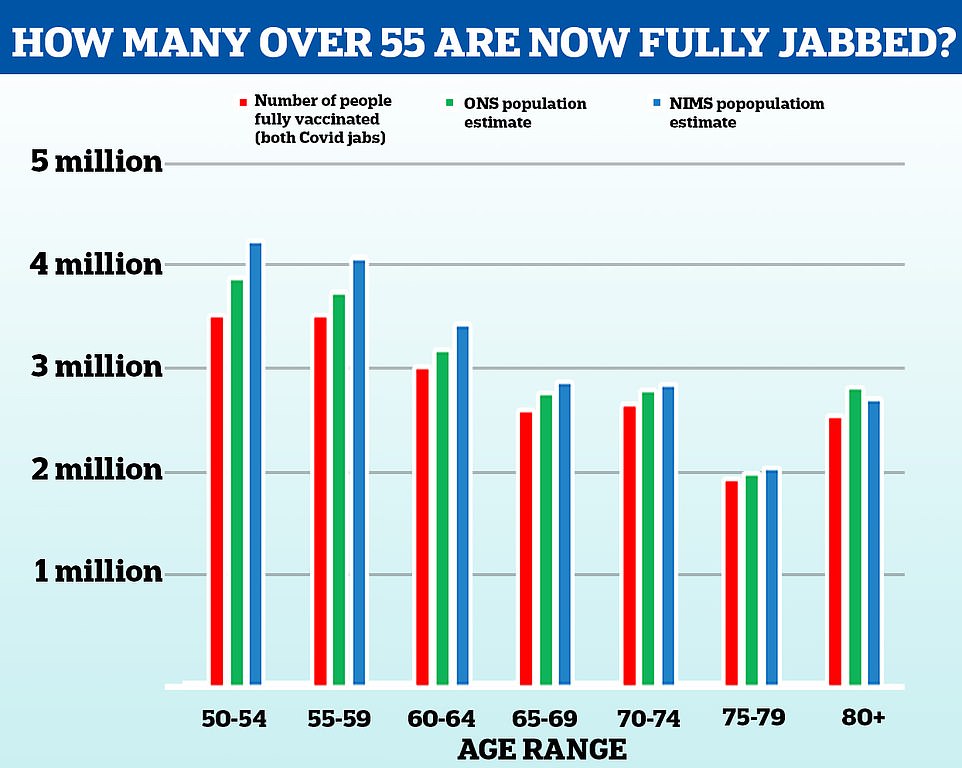 While most over 50s have got both their Covid vaccines, about 2million, or roughly one in 10 over 50s in England are completely unvaccinated as the country heads towards winter

Trends in ONS data tend to lag behind the figures for new cases as they capture lingering infections as well as new ones.

The latest figures on Covid vaccinations for England show that as of October 7, 20.3 million over 50s in England had received their first jab.

Schools in England have been open for around a month since the summer break and some epidemiologists have voiced concerns about rising cases among pupils.

In comparison, during the winter peak in December last year, the percentage of pupils testing positive for Covid was below 4 %.

This graph shows the number of first doses of the Covid vaccine administered in England. There was a rise in vaccines in March, when all over 50s were invited to get their first jab

The average prevalence of Covid-19 in England is estimated to be around one in 70 people- the highest level since the end of August.

All figures are for people in private households.

The rise in cases among school children is so pronounced that it has essentially created two separate levels of Covid-19, with one cohort exposed to transmission among the unvaccinated young, and the other continuing to see cases at a low level.

The rate of attendance is considerably higher than at this point last year but is still below pre-pandemic levels.

This graph shows the number of second doses of the Covid vaccine delivered in England. Numbers of second jabs have remained relatively stable since June but started to drop off in September.