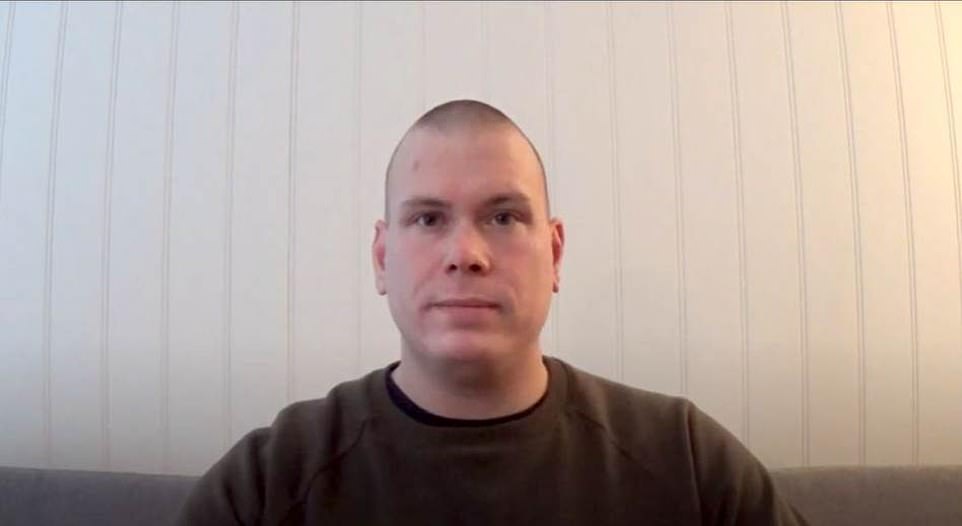 A Danish man in custody in Norway suspected of carrying out a bow-and-arrow attack which killed five people will appear in court on Friday morning, police said.

Officials named the suspect as Espen Andersen Bråthen, 37, and said he is a Muslim convert who had previously been flagged as having being radicalised.

Five people were left dead and three injured during the rampage in the small town of Kongsberg on Wednesday evening.

It is thought that he killed all his victims- four women and one man, aged between 50 and 70- during this time window.

The suspect is thought of having shot at people in a number of locations in the town.

he was arrested after a "confrontation" with police were called to the centre of the town, southwest of oslo, after the attack began. 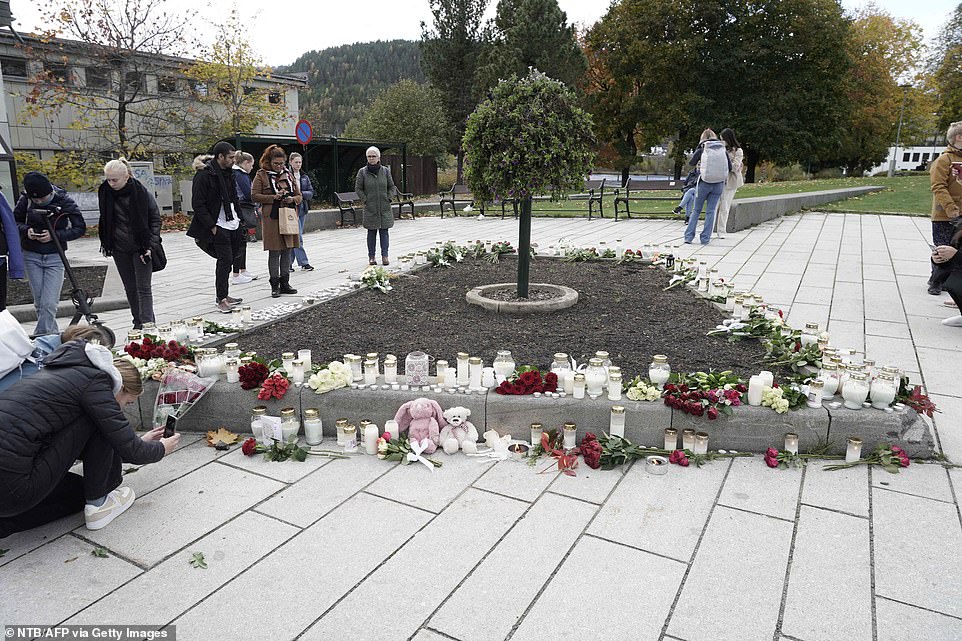 Local residents set up a vigil with candles and cuddly toys for the victims of the attack, which left five people dead

Officials believe that the man didn't start killing people until police arrived on the scene.

"from what we know now, it is reasonably clear that some, probably everyone, was killed after the police were in contact with the perpetrator," saeverud said.

As well as the five who were killed, two others remain in intensive care, including an officer who was off duty and inside the shop where the attack took place, police said.

"The man who carried out the act has been arrested by the police, and there is no active search for more people. 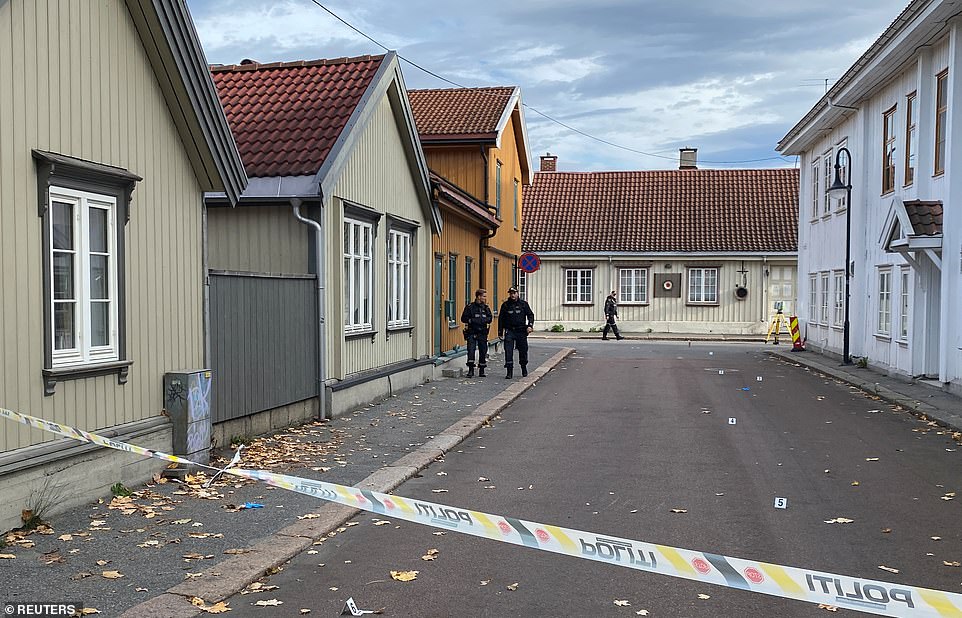 based on the information we have, there is one person behind this," police chief oeyving aas said, according to the associated press.

They also said that additional weapons, other than a bow and arrow, were used.

Local police chief Oyvind Aas confirmed that the attacker had managed to escape an initial confrontation with police before an arrest was finally made at 18:47 local time, 35 minutes after the attack began. 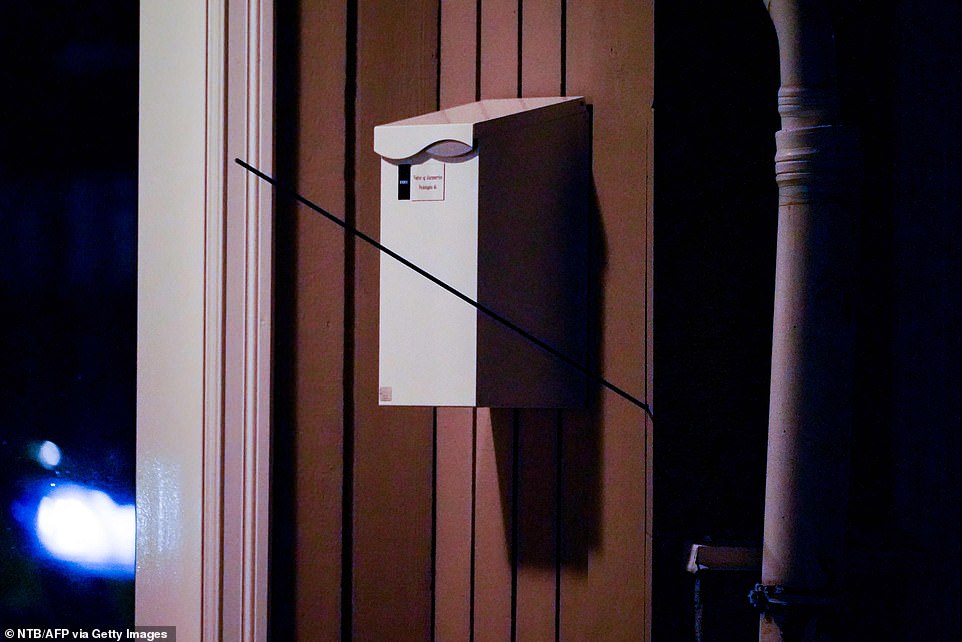 Police say they have arrested a 37-year-old Danish man, who has admitted being the attacker. They say he is a convert to Islam and had been flagged for radicalism (pictured, arrows in a wall near the scene)

Kongsberg's town mayor Kari Anne Sand toldTV 2 that it was "a gruesome incident".

Now we must try to take care of the inhabitants as best we can."

Norwegian police are normally unarmed but officers have access to guns and rifles when needed. 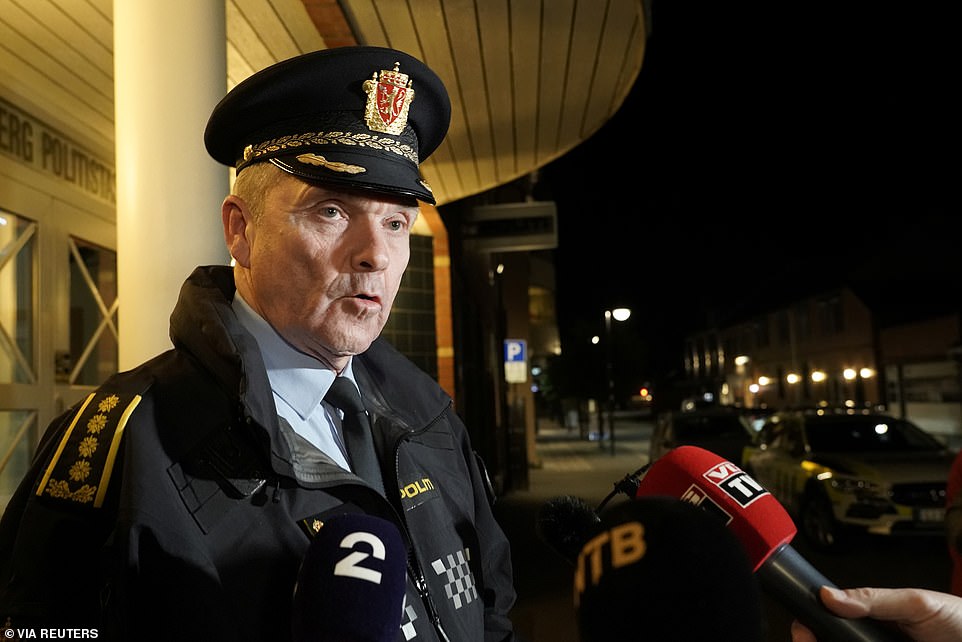 'We can unfortunately confirm that there are several injured and also unfortunately several killed in this episode,' police official Oyvind Aas (pictured) told a news conference

"This is an extra precaution.

"the police have no indication so far that there is a change in the national threat level," the directorate said in a statement.

Officers have cordoned large areas of the town, a municipality of around 28,000 people in southeastern Norway, 82km ( 51 miles ) from Oslo, and urged the public to stay home.

"i saw a group of police officers, including one of them was a woman holding a child by the hand,' she added.

Police first made contact with the attacker at 6.18pm when they were also shot at, and lost sight of him. It took until 6.47pm for the man to be tracked down, when he surrendered after officers fired warning shots (pictured, the scene today)

Then I went to see what was happening, and I saw the police moving in with a shield and rifles.

"I don't think anyone expects to have these kinds of experiences.

this is a shocking event that we did not think could happen in norway. ' 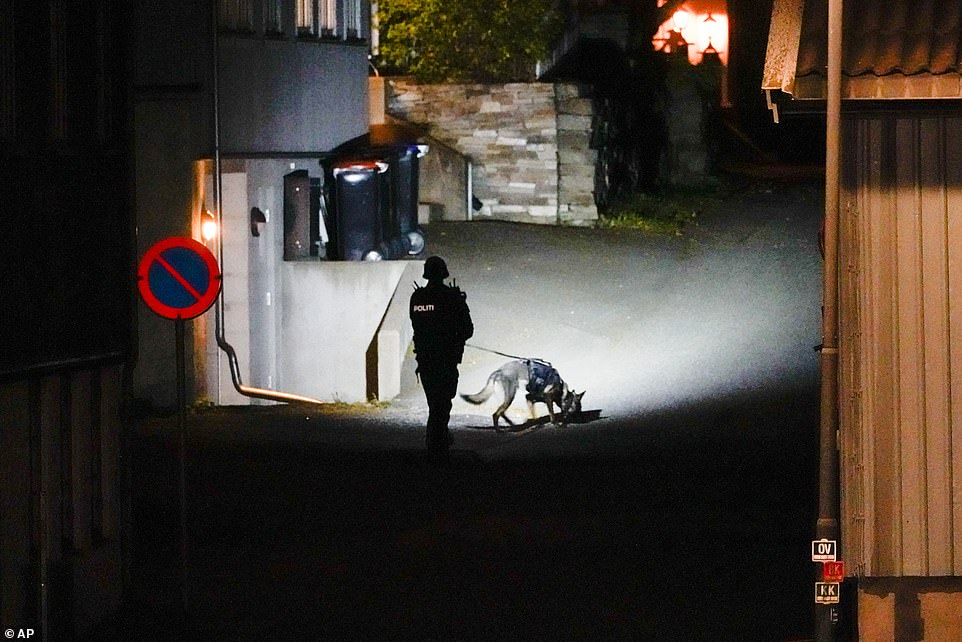 Shortly after the man was arrested, police were seen searching a nearby house. Investigators have not yet disclosed what was found at the property, or what the motive for the attack may have been

"A man in Norway just killed a bunch of people with a bow and arrow.

The victims were all aged between 50 and 70, regional police chief Ole Bredrup Saeverud told reporters on Thursday morning.

"I understand that many people are afraid, but it's important to emphasise that the police are now in control," she said.

the attacker is said to have launched the assault inside a coop extra supermarket on kongsberg's west side. 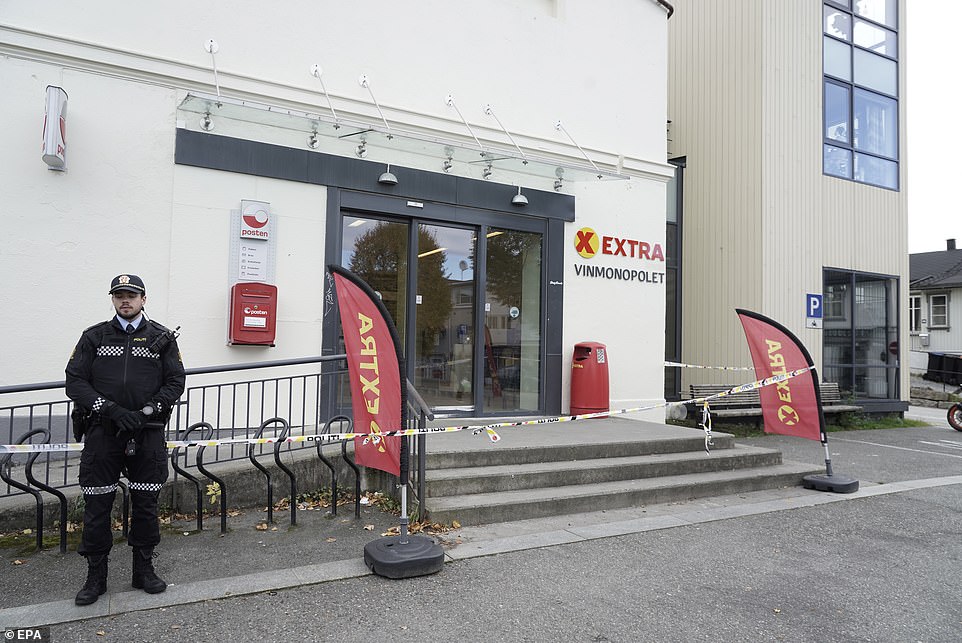 The attack began in a Coop Extra supermarket on the west side of Kongsberg at 6.12pm Wednesday, with armed police immediately dispatched to the scene

One of those injured was an off-duty police officer who was in the shop at the time.

One witness told local outlet TV2 she had heard a commotion and seen a woman taking cover, then a "man standing on the corner with arrows in a quiver on his shoulder and a bow in his hand".

"Afterwards, I saw people running for their lives.

Police have told Norwegian news agency NTB that the attacker also used other weapons during the incident, without giving more details on what they were. 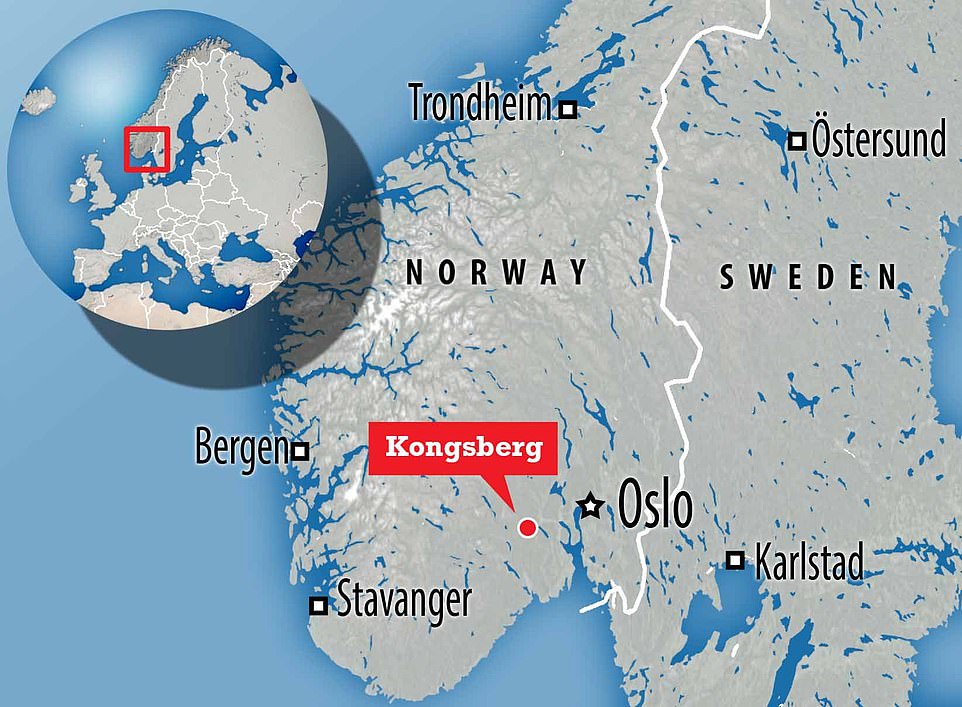 Kongsberg is a small town in southern Norway that straddles the Numedalslågen river with a population of about 26,000. It is known as the home of the Royal Norwegian Mint, houses the headquarters of a major arms manufacturer, and serves as a satellite cam

Are you in the area?

the suspect was taken to a police station in the town of drammen, where his defence lawyer, fredrik neumann, said he was questioned.

Norway's outgoing justice minister Monica Maeland told reporters the police did not yet know whether or not it was act of terrorism and could not comment on details emerging about the suspect.

Police prosecutor Ann Irén Svane Mathiassen told TV2 that the man had lived in Kongsberg for several years and was known to police. 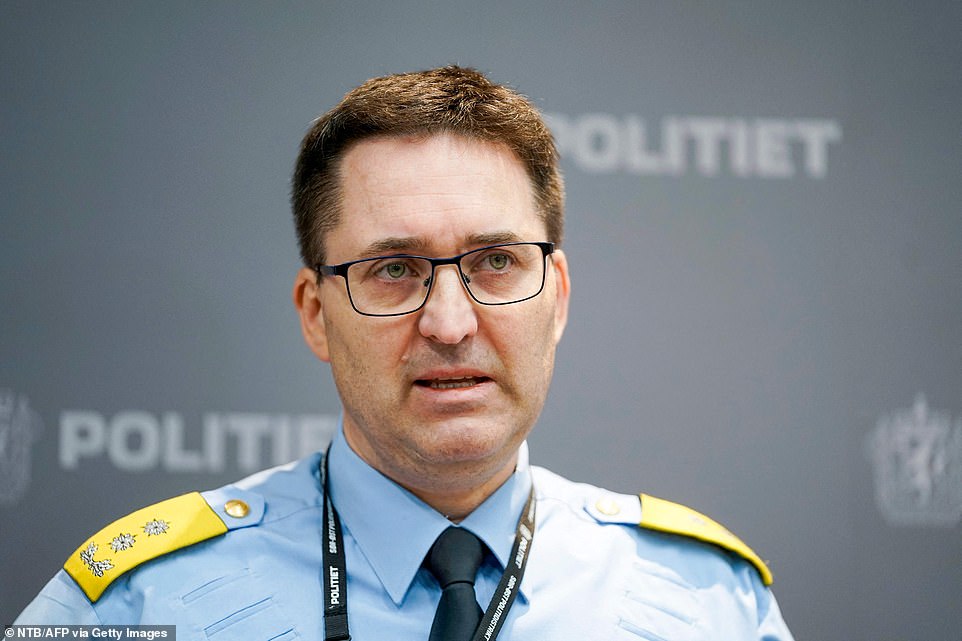 Ole Bredrup Sæverud, chief of police, speaks to journalists on Thursday - revealing that the bow and arrow attacker killed five people after being confronted by police and escaping

Mr Store said it was a "gruesome and brutal act", hours before announcing his new cabinet.

'The man used a bow and arrow ... for some of the attacks,' police chief Øyvind Aas told reporters adding that police were investigating whether other weapons had also been used. 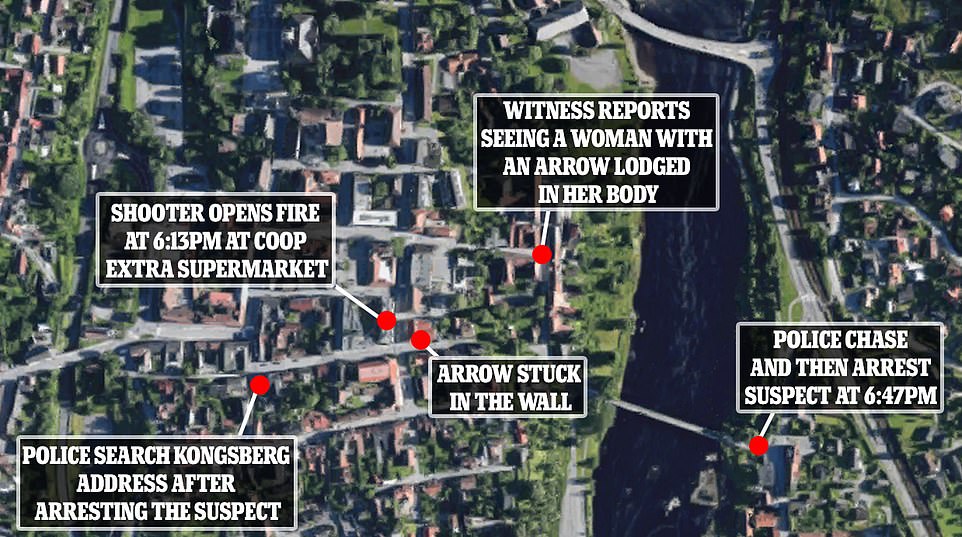 The attack began at a Coop Extra supermarket on the west side of Kongsberg at 6.13pm as the man opened fire with a bow and arrow, then walked through the streets apparently firing at random. It ended half an hour later and 400 yards away as police confron

Labour party leader Jonas Gahr Store, who is due to become prime minister today after an election last month, described the killings as 'cruel and brutal' and said his thoughts were with 'those affected, their families, and with the police, the health workers who are now working full time to assist those who need help. '

Breivik first set off a bomb in the capital Oslo next to the building that housed the office of the prime minister, then went on a shooting spree at a summer camp for left-wing youths on the island of Utoya.

'We can unfortunately confirm that there are several injured and also unfortunately several killed in this episode,' Aas told a news conference.

Hours after at least five people were killed and two were injured in the attack, the second amendment advocate said it showed gun control laws would not prevent mass killings. 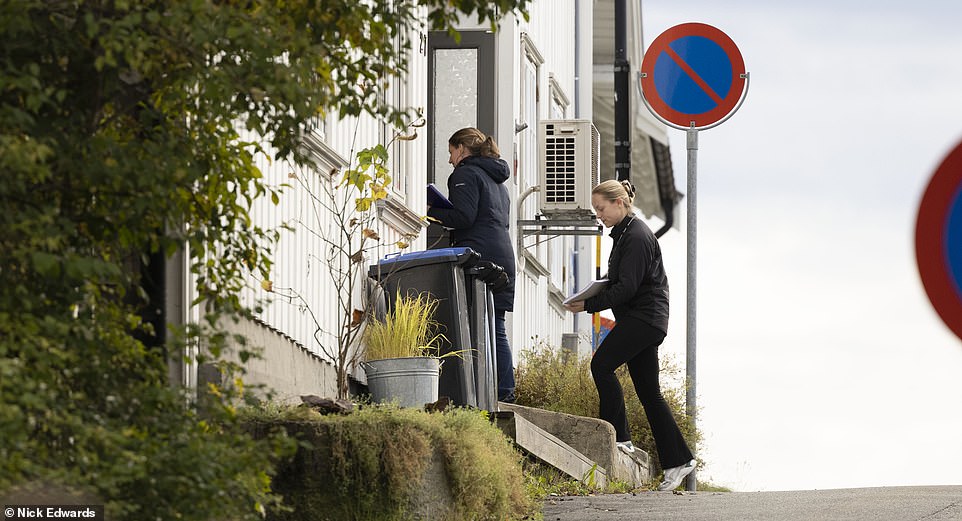 Police are seen knocking 'door to door near the home of Espen Andersen Brathen in Kongsberg, Norway